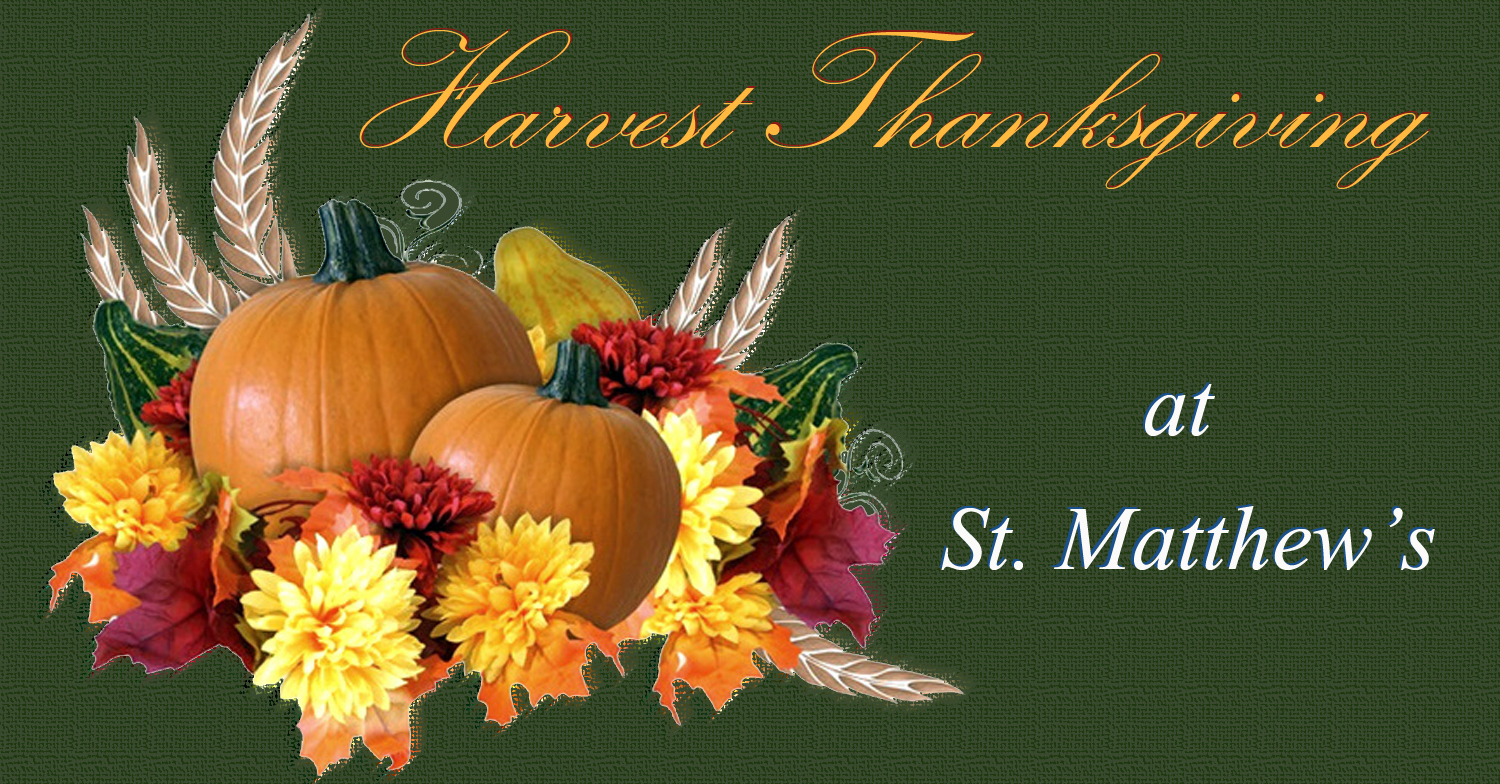 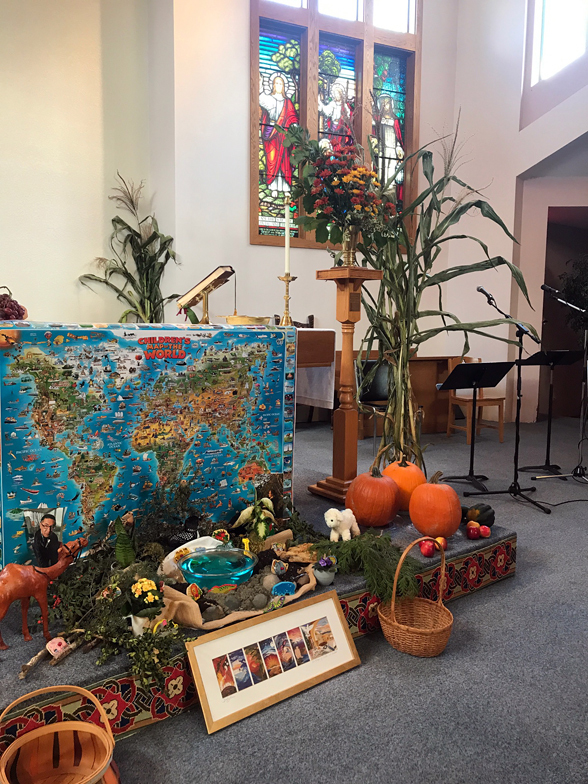 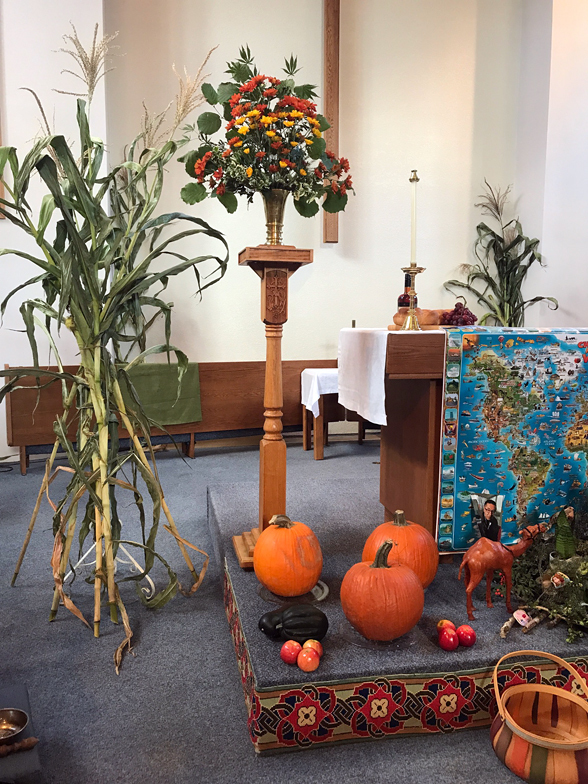 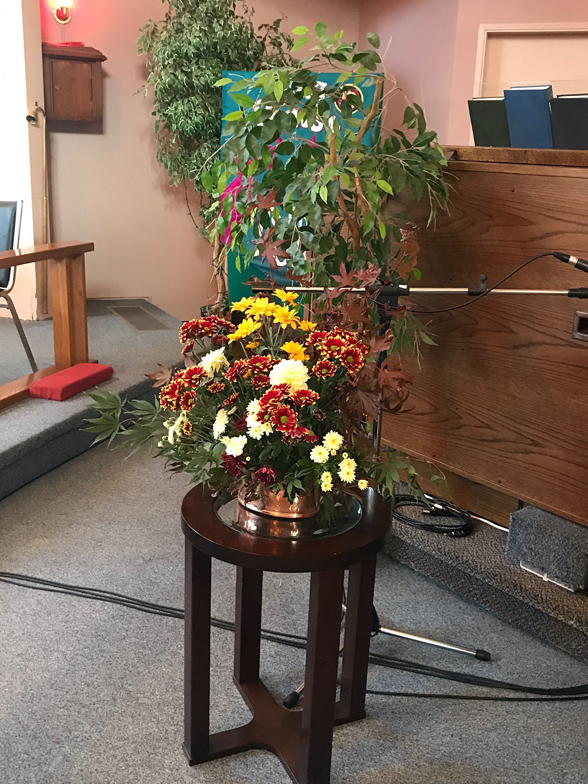 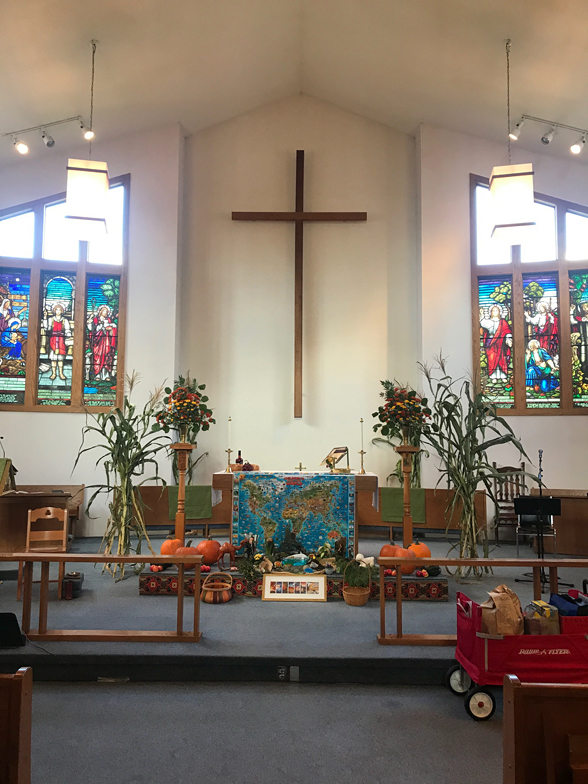 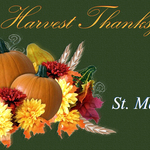 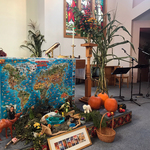 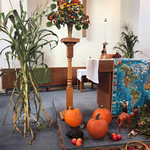 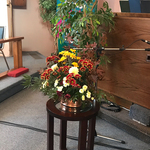 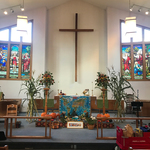 The Season of Creation, the weeks from Labour Day to the first Sunday in October, are a wonderful focus time. Leading, as it does, into the Canadian Thanksgiving and Harvest Sunday, there is a time to contemplate the world and then rejoice in gratitude.

This year, at St. Matthew Parish in Abbotsford, the altar front was decorated with a weekly theme acclaiming the story of Creation. Each Sunday of the season depicted one aspect of the Genesis story.

The setting began with a simple bowl of water placed upon a black and white cloth. This was the beginning of God's work out of the chaos and into night and day. The water naturally evaporated over the days which would perhaps signal to us that this is a precious commodity. Take care!

On Sunday, 12 September, soil had been added as mounds around the water. A patch of sand was also included. As the sand dried, the desertization process became apparent as in our era. The next Sunday, 19 September, branches of trees and bushes appeared with flowering plants. Here were the forests and fields, and there was the clear-cut logging as shown by a pile of dead sticks. Perhaps by this time God was saying that all was good, maybe.

Viewers on the last Sunday of September found animals in place. There were lions and tigers, and a rhino. A camel was contrasted with a sheep. Birds looked down from the trees. Some of the animals shown are on the current endangered species list. We do need to watch over elephants in our lifetime. There are elephants in our lives.

When the first Sunday in October came, so did the image of Adam and Eve, human beings on the planet. A picture of a man, an Indigenous North American, seemed to be contemplating the world around. He may have thought of a time, yet to come, when Earth would be treated with all due respect. The image of the woman, a European, is seen looking into the distance, perhaps humming, “Where Have All the Flowers Gone?”

Thanksgiving Sunday at St. Matthew's was a splendid time of praise and joy. The altar scene had been enhanced by the addition of huge corn stalks, and big pumpkins. Vegetables and fruit with flowers on the stands gave the sense of harvest home. All those present, and those at home watching on the love stream, had the opportunity to offer thanks to God for all this bounty.      During the season, the backdrop hanging on the altar was a detailed map of the modern world. This island home, which we call Earth, is all that we have. God intended this to be so, and God saw it to be very good. The Baptism Covenant reminds all humans that when we give thanks, we also need to remember our promise. “Will you strive to safeguard the integrity of God's creation, and respect, sustain and renew the life of the Earth? “Yes, we will, with God's help,” all respond.

God help us if we do not.